WHO IS TORI JOY? 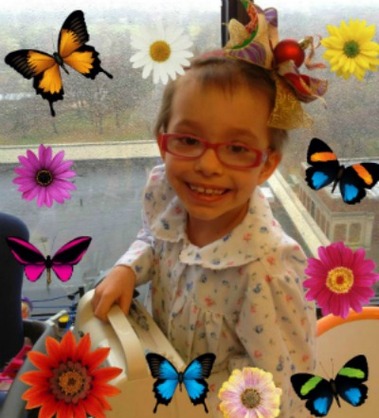 Torianna Joy, aka Tori, is a 7-year-old girl whose bright smile never seems to fade, despite everything she's been through.
At age one, Tori was put in foster care, along with her brother Jon. At the time she was a tiny, listless toddler   Under the care of her foster mother, Michelle, Tori grew and blossomed like a little flower. Michelle officially adopted the children in 2010.
The following year, Tori was diagnosed with neurofibromatosis, a genetic condition that causes tumors to grow on the nerves. Tori had a tumor in her brain, and one in each eye.
In February, 2012, little Tori underwent brain surgery to remove the brain tumor. Shortly thereafter, she started chemotherapy to stop the growth of the tumors in her eyes. She continues to undergo chemotherapy today. Tori's medical procedures have often caused her an unimaginable amount of pain... pain no child should have to go through. She hasn't even been able to attend school, because her immune system is often  too weak and the side effects from chemo are too strong. Like any other seven-year-old, Tori does cry and complain sometimes. But her beautiful smile always returns, winning the hearts of everyone she meets! She even won the heart of talk show host Ricki Lake, who has become an auntie to Tori and has had her on the show three times!
Although I have never met the famous Tori in real life, I have known her through her mother's blogs and though Facebook for most of her life! I have been inspired by stories of how all sorts of people... from members of Tori's hometown, to random strangers who heard about her through the grapevine... have reached out to her and made a difference in her life. When I heard that Tori enjoyed receiving cards in the mail from her Chemo Angels, I decided to become a Chemo Angel myself... but because my ADHD mind tends to keep going and going, I decided to take it a little further and create this group!
I believe that the one good thing about Tori having NF is that she gets the chance to see that there area whole lot of kind and caring people in this world. Someone standing in Tori's shoes could easily grow up wondering why she was dealt such a rough hand, being born into an unsafe environment, being in foster care, and having a genetic disorder that will effect her for her entire life. But she's seen people organize fundraisers to help her family and to raise money to find a cure for NF. She's gotten help from multiple organizations such as Make A Wish Foundation and Monkey In My Chair. She's met many professionals who have worked as a team to defeat her tumors, from doctors and nurses to child life specialists and pet therapists. She has more than 1,700 followers on her Facebook page. She knows that Team Tori is a pretty strong team. In fact, once when her mother tried to identify someone by saying, "She's someone on Team Tori," Tori replied, "I know that! Everyone in the world is on Team Tori!"
In return, she's given the rest of us a chance to get to know, whether in real life or through the virtual world, an amazing kid from an incredible family, and she's taught us all how easy it is to make a difference in the world by just picking something and doing it.
So, Tori, this is my something! I hope you like it!